Guide for Aliyah Ethiopia, all the information you need to know and a 3 steps guide!

Ethiopian Jewish Aliyot: Operation Moses [1984], Operation Solomon [1991]
The Early 1980s In the early '80s, many Ethiopian Jews began leaving their villages in the rural areas and making their way to the southern Sudan, from where they hoped to make their way to Kenya -- and from there to Israel. The second stage of their journey was made from the Sudan aboard Israeli Navy craft which awaited them in the Red Sea and brought them to Israel. The existing Ethiopian Jewish community in Israel at this time numbered around 7,000 souls; by late 1981, 14,000 more Ethiopian Jews had arrived; this figure had doubled by mid-1984.

Mid-1984 saw the beginning of a mass rescue operation, entitled "Mivtza Moshe" [Operation Moses]: over a period of a few months, 8,000 Jews were flown from Khartoum [Sudan] to Europe and from there to Israel. News of the rescue leaked out to the foreign media in November 1985, with the result that President Numeiri of Sudan halted the operation for fear of hostile reaction from the Arab states. After mediation by the US, Numeiri allowed six American Hercules planes to airlift the last remaining Ethiopian Jews in Sudan; their arrival in Israel brought the numbers of olim to around 16,000. 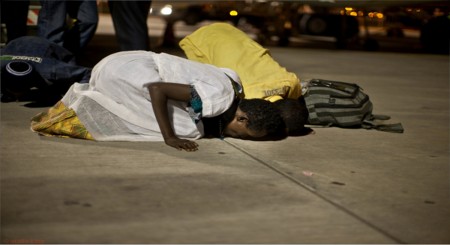 Towards the 1990s In December 1989, 15 years after the rupture of diplomatic relations between Ethiopia and Israel, the Israeli Embassy in Addis Abbeba was reopened. With the renewal of diplomatic relations, contact was made between people who had left Ethiopia for Israel and those who had remained behind. Families were instructed to make their way to Addis Abbeba and apply to the Embassy to bring them to Israel. By the end of 1990, between 16,000 and 17,000 Ethiopian Jews had arrived in Addis.

In May 1991, after Ethiopian dictator Mengistu fled the country, the new regime consented to allow Israel to operate a continuous airlift for a consideration of forty million US dollars. Thus, on May 24 1991, over the Shavuot festival, 14,000 people were flown overnight to Israel. This was known as "Mivtza Shlomo" [Operation Solomon], a procedure which took all of 48 hours and during which 7 babies were born. Following this mass rescue, 6,000 more Ethiopian Jews came on aliya, bringing to an end the 3,000 year old saga of the Ethiopian Jewish community, as told in their tradition. 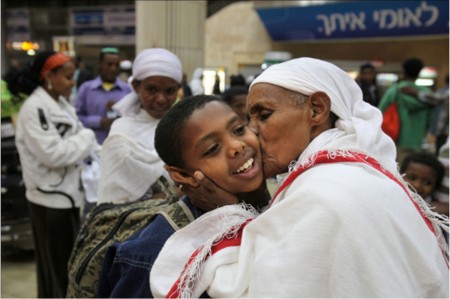 The Community in Israel In all, about 35,000 Ethiopian Jewish have come to Israel.
The integration of Ethiopian Jewry, with their distinctive appearance and customs, provided a Zionist challenge of the highest order to both the Israeli government and Israeli society. A special plan was drawn up to assist the absorption of this unique population into Israeli society.

The initial wave of aliya [1981-85] occurred during a period of record low for aliya in general and was staggered over several years. By 1986, half of the olim were already settled in permanent housing following their period of ulpan [Hebrew language instruction] and initial professional retraining. They were dispersed over some 40 towns and villages, with a preference for the central regions and proximity to the large cities.

In the second wave of aliya [1991], most of the olim arrived within 48 hours at the same time as the country was experiencing a massive wave of aliya from the USSR [ see: Aliya from the CIS ]. In 1992, because of a dearth of housing, the olim of Mivtza Shlomo were transferred to temporary pre-fab housing sites around Israel. The issue of permanent housing was crucial and a plan was adopted in May 1993 to provide an 85% grant towards the cost of housing, with the balance to be defrayed as a soft loan in monthly repayments. By late 1995, 85% of the olim who had been living in the "caravan" sites had found housing in 65 different localities throughout Israel.

Special enrichment programs were launched in schools for Ethiopian children and the institutes of higher education operate preparatory courses for Ethiopian students. The IDF also became involved in the absorption of the Ethiopian aliya with a range of special educational programming. To date, 1,500 Ethiopian olim serve in the IDF, including 23 officers, and there is a growing number of volunteers applying to combat units. In general, the successes of both waves of aliya are among young people: in the army, universities and education.

There nevertheless emerged a number of problematic areas in their absorption:

Some of these difficulties were common to other waves of aliya, where they were largely resolved in time. It is to be hoped that the problems facing Ethiopian Jewry in Israel will follow a similar path and that they will make their own special contribution to the fabric of Israeli society.

In December 2010, the the State of Israel appointed the Jewish Agency to complete – over the course of three years – the immigration of Ethiopia’s approximately 8,000 remaining Jews (the Falash Mura) from the poverty, anti-Semitism, disease and instability characterizing life in Africa to a better life among their people, in Israel.
To meet this undertaking, the Agency assumed the operation of the Gondar facility (Gondar is a city and separate woreda in Ethiopia), where they provide basic care and Aliyah preparation. Their next challenge is absorbing these new immigrants – many of whom are illiterate and unfamiliar with Western life – into Israeli society. The current plan is to conclude Ethiopian Aliyah by 2014.

On November 14th, 2010, the Government of Israel approved a decision to bring the remnant of Ethiopian Jewry to Israel. This process will begin in January 2011 at a rate of 200 olim per month.
Starting in April 2011, the Jewish Agency will be responsible for services to the local community in Gondar.
The services to be provided in Gondar by the Jewish Agency Jewish community life, including education, health and community services, has existed in Gondar for about a decade.
The Jewish Agency’s goal is to prepare the olim for aliyah and an optimal absorption process in Israel.

All of new immigrants to Israel are provided with a medical check-up in Gondar before making the trip to the Ethiopian capital of Addis Ababa, where they take a plane to Israel. Each new immigrant is also given a grant for food and new clothing prior to the flight to Israel
As of today, there are 6,000 Ethiopian Jews signed up to receive medical care from this clinic and who are awaiting aliyah to Israel. The clinic treats between 100 and 120 people per day. It is a full service clinic which also makes referrals to hospitals.

JHI’s Pre-Aliyah Screening & Referral Program in Gondar will help ensure that they arrive in Israel with medical information and documentation that will allow them to access the excellent healthcare services available to them in Israel.

Please visit our "Step-by-step" Guide of the first steps in Israel as a New Oleh.