All the information about Ulpan - Hebrew studies in Israel

An Ulpan is an institute or school for the intensive study of Hebrew. Ulpan is a Hebrew word meaning studio or teaching, instruction. The Ulpan is designed to teach adult immigrants to Israel the basic language skills of conversation, writing and comprehension.
Most Ulpanim also provide instruction in the fundamentals of Israeli culture, history, and geography.
The primary purpose of the Ulpan is to help new citizens to be integrated as quickly and as easily as possible into the social, cultural and economic life of their new country.

History of the Ulpan

The concept of the Ulpan was initiated soon after the creation of Israel in 1948. The new country was faced with a massive influx of new immigrants, refugees from war-torn Europe, oppressed and disadvantaged communities from Africa and the Middle East, and others from all parts of the world. Although all were recognized as Jewish, their language and culture varied widely.
Attendance at an Ulpan and learning the Hebrew language served as a common bond that helped to develop a shared identity and sense of statehood. 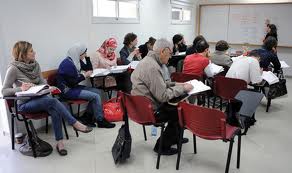 The institution of the Ulpan continues to serve immigrants today. There are numerous private facilities but the majority are run by the Jewish Agency, municipalities, kibbutzim, and the universities.
Ulpanim used to be free to new olim to Israel. Nowadays the cost can vary depending on the type and length of the course. Many are equipped with modern audio-visual teaching aids.
Since the establishment of the first Ulpan in Jerusalem in 1949, more than 1.3 million new immigrants have graduated from Ulpanim.

The Ulpan framework has been adopted by other nations attempting to revive their own declining or lost languages. Wales, Scotland, and Norway have used the Ulpan model for native language instruction.
Certain language courses in Wales and Scotland have even retained the name Ulpan (spelled "Wlpan" in Welsh and ?lpan in Scottish Gaelic).
The Sami people of Norway sent a delegation to Israel in 2012 in order to experience Israel's Ulpan program and apply its methods toward the preservation of its own threatened linguistic heritage.

A number of kibbutzim across Israel also offer Ulpan courses. The course typically lasts 5 months and the Ulpanists will usually work part-time on the kibbutz (either 4 hours a day or 8 hours every other day, depending on the kibbutz) in addition to their studies.
Participants have the option of choosing kibbutz Ulpan programs either on secular kibbutzim or on religious kibbutzim through Hakibbutz Hadati (Religious kibbutz) movement.